DANGER: CONTENTS MANY BE RADIOACTIVE 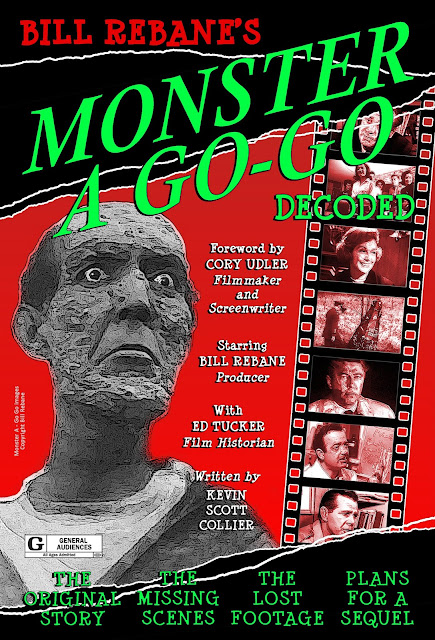 Over 50 years, ago a capsule returning from space landed in the tiny town of Half Day, Illinois. It’s pilot, Frank Douglas, was nowhere to be found. But when disfigured corpses began to pop up, investigators and authorities began a hunt for a giant-sized monster—the radioactive result of what Douglas had become. But fear not. It all came from the mind of filmmaker Bill Rebane. This book explores the sci-fi cult classic Monster A - Go Go, released by Herschell Gordon Lewis in 1965, from genesis to completion. It also takes a look at what the film should have been, had resources and opportunities panned out. Outlined are scenes that were written, but never filmed, and segments that were filmed, but that never made the final edit of the motion picture. The lost scenes, backstories and more, as told by Bill Rebane, provide an all-new look at the movie. Foreword written by Cory Udler and film print information from Ed Tucker.

Posted by Kevin Collier at 3:43 PM No comments: